Both the M4U eX and the M8U eX can be operated either with or without a computer connection. In this article we describe the so-called "standalone mode", which is the usage without a computer. The pictures below show M8U eX, but you will see that the same information applies for M4U eX as well, just with less I/O ports.

Note: for operation without a computer, the standalone mode, it is required to use the included 5V DC power supply.

Note: if the MIDI interface is used in standalone mode, the integrated USB 3.0 hub cannot be used.

If you would like to use the M4U eX or the M8U eX in standalone mode, one of three different operation modes can be selected using the front mode button. The following picture shoes this button: 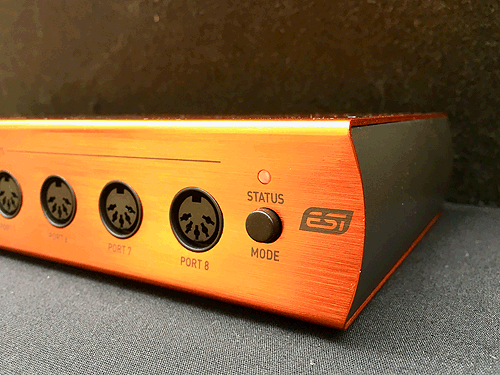 The button is just below the status LED on M8U eX and left of it on M4U eX. With the button you can "step" through the different options (described below) by pressing it once or several times. The numbered I/O LEDs indicate the mode you have selected.

Groups of two MIDI ports operating as inputs (green LEDs) pass the signal on to the next group of two, which in turn act as an output (red LEDs). For example inputs 1 & 2 to outputs 3 & 4. 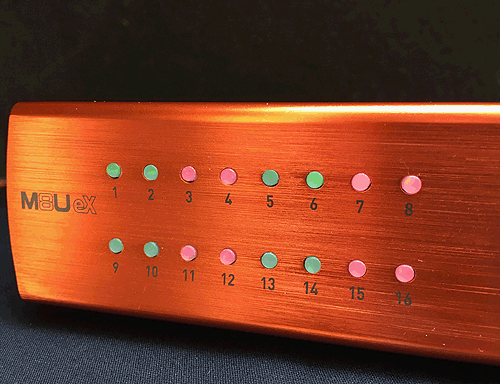 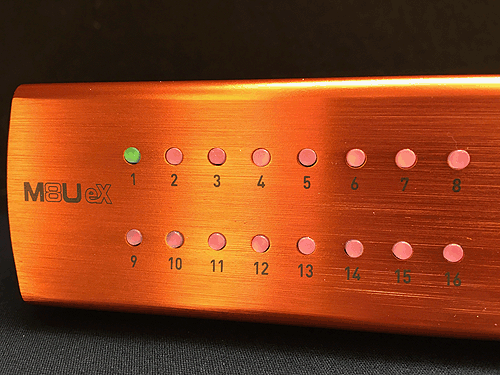 Example: Select this mode if different sound modules such as expanders, drum machines or synths should receive all performance data from the same keyboard.

MIDI port 16 is output (red LED) while MIDI ports 1-15 act as inputs (green LEDs) for this signal. The signals are all merged. You should note that SysEx data will only be transferred when it arrives through input number 1 (which means that there is a priority) as merging other signals while a SysEx data stream is being transferred would destroy the data and make it unusable. 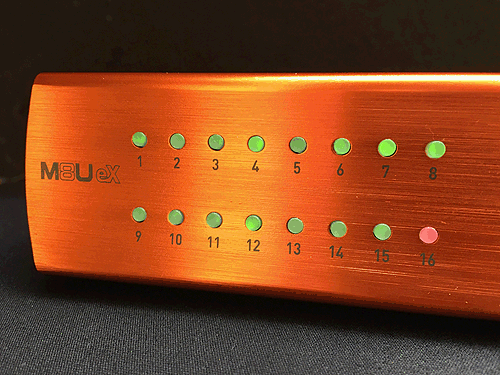