Multichannel playback with U168 XT/U108 PRE under Windows

U168 XT and U108 PRE provide a professional ASIO drivers, following the common standard from Steinberg. The ASIO device is called ESI U168 XT or ESI U108 PRE and appears in all ASIO compatible applications for selection, both 32-bit and 64-bit. Nearly all common DAWs are ASIO compatible, incl. Bitwig Studio, Cubase and many others. Also many DJ applications that support multiple output channels work with ASIO. Please refer to the documentation of your audio software to check if it supports ASIO and how the device is selected and channels are assigned.

In the Windows Control Panel under Hardware and Sound > Sound, you can select the default playback device that is used by all audio applications that do not have their own preferences. It looks like the following dialog (shown here for U168 XT, it looks basically the same for U108 PRE): 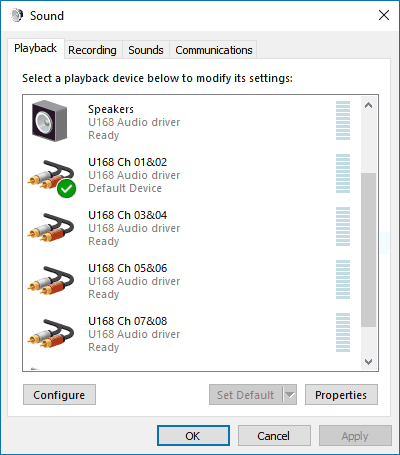 U168 XT and U108 PRE also provide a multichannel speaker device that is generally used usually by more modern applications for multichannel playback. Also programs like DVD player software use this device for multiple output channels simultaneously. Selectable under Sound in the Windows Control Panel, the Speakers device of the U*8 Audio driver, can be additionally configured to define the number of output channels. Select it and click Configure at the bottom of the window to get the following Speaker Setup dialog:

Obviously the multiple outputs of U168 XT and U108 PRE are intended mainly to send out different signals individually at the same time. However, there might be special applications where it is helpful to send out the same signal through all output channels. For this, we provide a function called DirectWIRE Output Channels which you can control via the DirectWIRE menu in the control panel of U168 XT / U108 PRE. With this, you can define the signal source channel from your software for each physical output channel of the hardware. In this article, the function is explained in detail.