Multichannel playback with UDJ6 under Windows

We get often asked about the independant output channels of UDJ6, especially about the options of multichannel playback from various different applications. Our current drivers (this article is written based on v1.25 with focus on Windows Vista and higher) support a number of different options for multichannel playback, providing the highest level of compatibility with all different types of audio applications. This might be important for you to check compatibility with existing applications you already have or if you want to develop your own audio application.

UDJ6 provides a professional ASIO driver, following the common standard from Steinberg. The ASIO device is called ESI UDJ6 and appears in all ASIO compatible applications for selection, both 32-bit and 64-bit. The following is an example with Cubase LE: 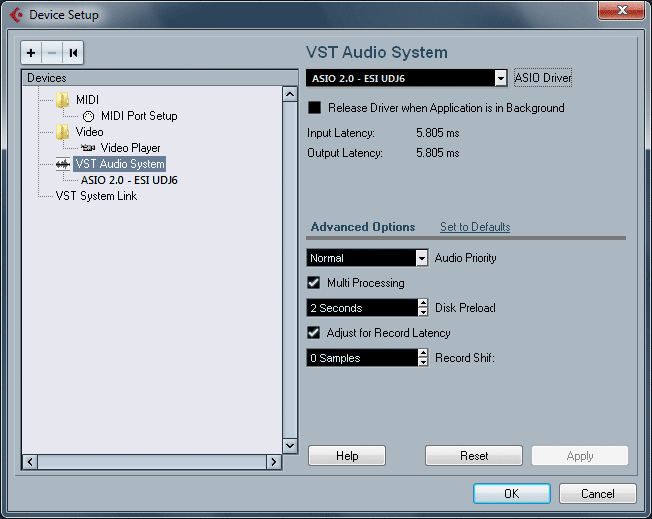 Please refer to the documentation of your audio software to check if it supports ASIO and how the device is selected and channels are assigned.

In the Windows Control Panel under Hardware and Sound > Sound, you can select the default playback device that is used by all audio applications that do not have their own preferences. It looks like the following dialog: 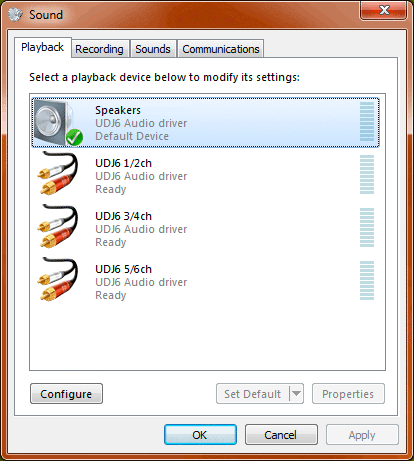 UDJ6 also provides a multichannel speaker device that is generally used usually by more modern applications for multichannel playback. Also programs like DVD player software use this device for multiple output channels simultaneously. Selectable under Sound in the Windows Control Panel, the Speakers device of the UDJ6 Audio driver, can be additionally configured to define the number of output channels. Select it and click Configure at the bottom of the window to get the following Speaker Setup dialog:

Obviously the multiple outputs of UDJ6 are intended mainly to send out different signals individually at the same time. However, there might be special applications where it is helpful to send out the same signal through all output channels. This can be configured in the control panel of UDJ6: 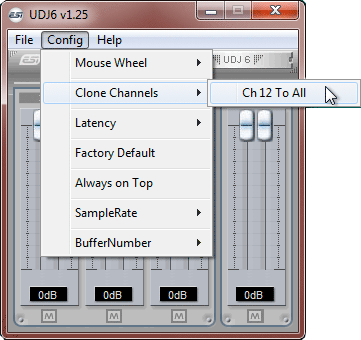 Via Config > Clone Channels > Ch12 To All you can enable the "cloning" of the signal played via channel 1/2 to all physical outputs. If selected, every signal (no mater if ASIO or MME) that is sent out via playback channels 1 and 2 will be sent to all physical outputs (i.e. it is cloned to 3/4 and to 5/6). When the option is deactivated, the channels are independent again.

Please note that the Clone Channels menu option has been replaced with the much more powerful DirectWIRE Output Channels functionality, starting with driver v1.3 and higher.